The first Hospital was located at 641 South Baxter Ave.  In 1918, Dr. Timmons had a new hospital built at 236 South Interocean Ave.  It was later purchased by Dr. H.C. Hill and his wife, Irene.  They lived in the downstairs area of the hospital while maintaining a 10-room hospital on the floor above them.  In 1949, the community raised enough funds to purchase the hospital from Mr. Hill.  It was turned over to Phillips County and governed by a board of directors appointed by the county commissioners.  The living area was then turned into a delivery room and a small surgery room.  C-sections, tonsillectomies, appendectomies, and hernia repairs were just some of the surgeries performed in the new surgery room.  Before the addition of the delivery room, women labored in delivery homes located throughout the county.  At times, Mr. Will Heginbotham drove the doctors to these homes by horse and buggy.

In 1964, Will Heginbotham donated the property and funds to build a new hospital at 505 South Baxter Ave.  In return, he requested that the new hospital be named after his mother, Melissa.  Melissa Memorial Hospital opened its doors in July of 1965.  The building was 75 feet by 190 feet and was constructed of fireproof masonry and steel.   It had room for 25 patients and featured the latest in medical technology and equipment for its time.  It’s interesting to note that the caged elevator from the previous hospital was brought over to the new hospital to provide access to the basement, which was used for storing supplies and records.  The first patient at the new hospital was Fred Peterson, a former mayor of Holyoke.  Records show the hospital had a census of 15-17 patients with an average length of stay of seven days through the 1960’s and 1970’s.  Philanthropic giving by Roy C Gebhart, Henry and Mary Massman, Philip and Frances White and the Will Heginbotham Trust helped sustain the hospital during a difficult period.

At the turn of the century, Melissa Memorial Hospital was facing a shortage of space with the specialty clinics using patient rooms and patients having to wait in the halls.  The emergency room also did not allow for any privacy that was required and expected by families.  As medicine evolved and a public need emerged for additional services, a new hospital became the driving force of Administrator, Arlene Harms and CFO, Shelly Larson.  A collaborative effort was formed between the MMH Board, Melissa Memorial Hospital Foundation, and the community in 2002.  The MMH Board members involved throughout this process included Cherrie Brown, Gary Krumm, John Baldwin, Sharon Thompson, Steve Young, Ray Malleck, and Sheryl Farnsworth.  The groundbreaking was the next phase in the Holyoke healthcare legacy on a very cold November 18, 2006.  The project was completed on schedule and almost one million dollars under the eighteen million dollar budget.  The grand opening ribbon was cut on March 7, 2008.

In 2015, Melissa Memorial Hospital began its renovation and expansion project, which will include a specialty clinic and family practice addition, an onsite residence, an enclosed ambulance drop-off area and ambulance storage, another laboratory entrance and new office space, as well as an onsite Helicopter landing pad, parking, and drives for the critical access hospital.  An in-house Pharmacy was also added off of the clinic waiting room during the project.

The groundbreaking ceremony took place on Oct. 12, with a completion in the summer of 2016.

To document Melissa Memorial Hospital (MMH) compliance with Federal regulations and Critical Access Hospital (CAH) Conditions of Participations for CAH (CFR § 485.641): The CAH carries out or arranges for a periodic evaluation of its total program. The evaluation is performed at least once a year and includes a review of the utilization of CAH services, including at least the number of patients served and the volume of services; a representative sample of both active and closed clinical records; and an annual review of policy and procedures. As a Critical Access Hospital (CAH), MMH performance review process touches on volume of service, type of service, improvements, trends, concerns and department specific accomplishments. The Leadership team develops action plans for commented areas of concern and then determines what, if any policies or processes should be revised or implement.

Information used for this Annual Report was obtained through the following mechanisms: 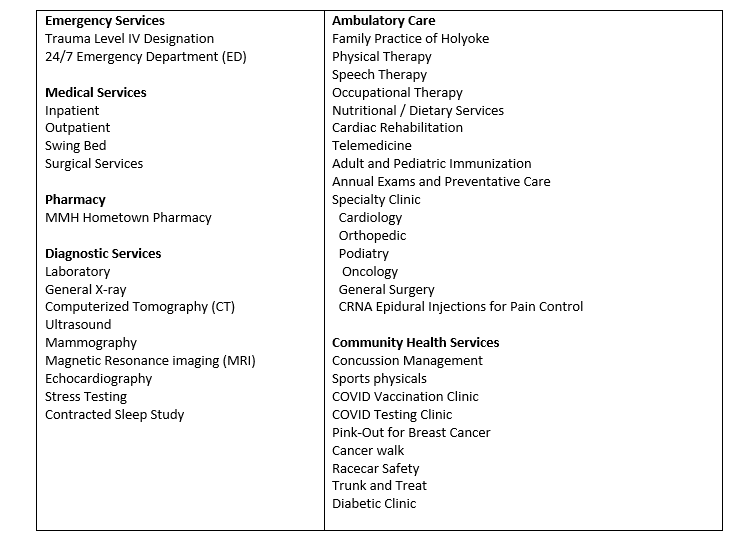 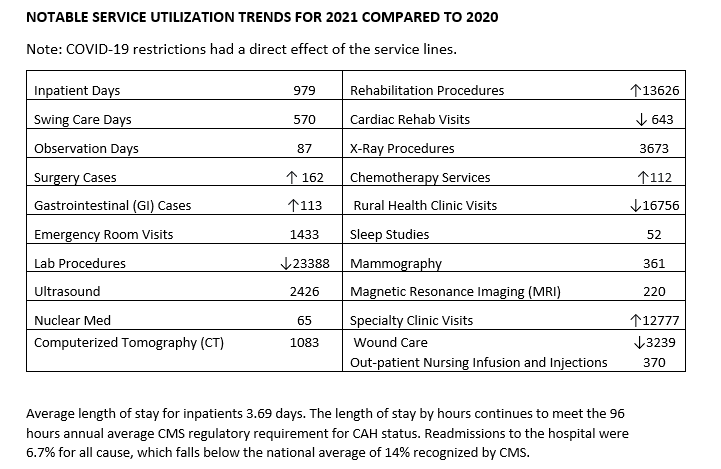